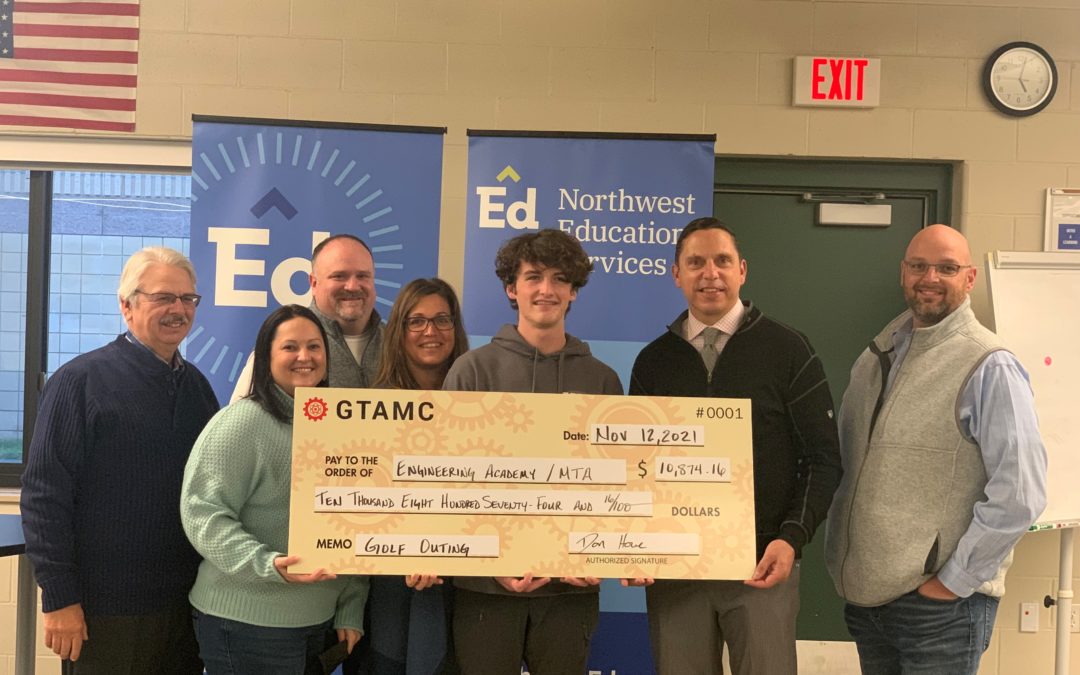 Last Friday, the Grand Traverse Area Manufacturing Council (GTAMC) donated over $10,000 to the Engineering Academy at the Northwest Education Services Career-Tech Center. The donation comes from funds raised at the GTAMC golf outing, an event held every year to benefit the Engineering Academy program. The total amount of the donation – $10,874.16 – is the largest sum of money that GTAMC has ever raised in the 25-year history of its annual golf outing fundraiser.

The Career-Tech Center’s Engineering Academy – recently rebranded from its former name, the Manufacturing Technology Academy – is described as “an award-winning program for high school juniors and seniors that integrates courses in science, mathematics, economics, and English around the themes of technology, robotics, manufacturing, and engineering.”

“We want to make sure that the manufacturers are taken care of by having good educational resources locally,” said Kevin Olds, a GTAMC board member and the organizer of the golf outing. “We don’t want people to graduate from high school and go off to engineering school, and then move to Texas or Florida or California. We want them to come back home and support the manufacturers here. We have tons of manufacturing in this area, and those manufacturers are always looking for good help. And those are higher paying jobs, too. So we do this event specifically to support [the Engineering Academy] and to get young kids interested in manufacturing careers.”

According to Debbie Oliver, who has been an instructor with the Engineering Academy since 1996, the program has a strong track record of graduating students who eventually “boomerang” back to northern Michigan to take jobs in the region. Right now, alumni of the program are working with local businesses such as Britten, Cone Drive, Promethient, SMI Aerospace, Kennametal, Electro Optics Technology, R.M. Young, RJG, Hayes Manufacturing, Century, Birch Infrastructure, Grand Traverse Plastics, Graceland Fruit, Team Elmer’s, and more.

Pat Lamb, who serves as principal of the Career-Tech Center and assistant superintendent of career and technical education for Northwest Education Services, tells The Ticker that GTAMC has raised over $100,000 for the Career-Tech Center since the golf outing first began. Most years, the money is used to finance a trip for Engineering Academy students to travel to Marion, Ohio, where they compete in the National Robotics Challenge competition.

“We so appreciate the manufacturers and their involvement in our program,” Lamb says. “They have given not only great support in this golf outing, but many of them are mentors to our students, and those contributions go beyond a dollar amount. What sets our program apart from other programs is the mentoring that is given to our students by the manufacturers that participate in GTAMC. The number of them that allow our students into their facilities for work experience or paid co-op experience is vital to the success of the program.”

Stay in the "Know"